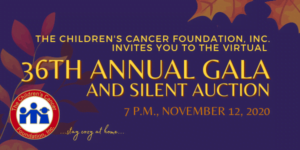 Azrael Franz is proud to once again sponsor The Children’s Cancer Foundation’s (CCF) 36th Annual Gala and Silent Auction.  This year, the Gala will be virtual.  As stated by the CCF, “Cancer does not stop during a pandemic.  Neither can we.”  The gala begins at 7 PM tonight, November 12, 2020.

For more information on the Gala, please visit CCF’s website.

The Children’s Cancer Foundation, Inc.  is an independent Maryland nonprofit organization committed to funding locally-based cancer researchers, programs and facilities until every child is assured a healthy future.  Since its founding in 1983, CCF has awarded over $38.6 million to area hospitals and researchers to treat and cure childhood cancers.

CCF annually awards grants to local researchers advancing breakthroughs with clinical trials.  CCF also invests (i) in local pediatric oncology units in need of upgrades, ensuring pediatric patients receive state of the art technology for their treatments, and (ii) in programs that improve the quality of life of the patients and their families. 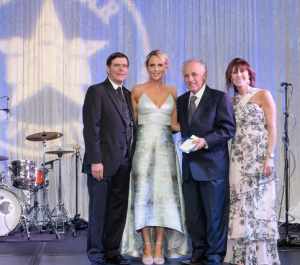 Pictured: At its 34th Annual Gala, CCF awarded the 2018 Fighter Award to Azrael Franz.  Jonathan Azrael accepted on behalf of the firm.

One must go back to the beginning of CCF to appreciate the history between it and Azrael Franz.  When CCF’s founder, Shirley Howard, visited Johns Hopkins and other local hospitals in the early-1980s, there were no family-friendly areas designed to treat children with cancer.  Children were in the same area as adult cancer patients and only 1 in 10 children with a cancer diagnosis survived.

Ms. Howard realized that young researchers often abandoned their passion to conduct pediatric cancer research because there were no grants in this field and they recognized that it was difficult to get started in research without grant dollars.  She thought, “What if I could fund some of these researchers?”  And so, with the goal of investing in research, improving facilities, and creating programs designed to treat pediatric cancer patients, the concept for CCF was born.

Thereafter, Ms. Howard asked her good friend, Azrael Franz Founding Partner Edward Azrael, to incorporate The Children’s Cancer Foundation, Inc. and to serve on its ﬁrst Board of Directors.   In 1983, Azrael Franz incorporated CCF.  Over the next 36 years, Azrael Franz continued to honor Ed’s commitment to Ms. Howard by providing CCF with valued legal counsel on corporate, business, estates and trusts, real estate and other matters free of charge.  Azrael Franz Senior Partner Jonathan Azrael followed in his father’s footsteps and served on the CCF Board and as its legal counsel until 2015. He was succeeded by Azrael Franz Partner Paul Schwab, who currently serves on the Board and is its attorney.

Make a difference. Click here to make a donation.