31-year-old Salah Mamache, of Baltimore, was charged in a fatal crash in Anne Arundel County Tuesday, March 3rd.  The victim was Mark A. Wieland, 43, of Severn. 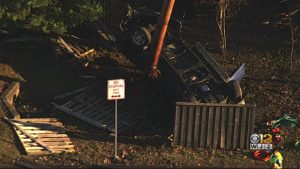 through Glen Burnie and Severn Tuesday afternoon.  The pursuit allegedly began when the victim struck Mamache’s car and then refused to stop.  According to police, multiple people called 911 around 4:30 PM reporting two vehicles involved in a

hit-and-run crash that were now speeding on the southbound side of I-97 between I695 and Route 100 in Glen Burnie.

The chase ended when the victim’s truck lost control near 170 and Old Telegraph Road.  The truck struck a pole, killing the victim.  Mamache was charged overnight with negligent homicide, criminally negligent manslaughter, fleeing and eluding, negligent driving, reckless driving, and speed greater than reasonable and prudent.

The official release from the Maryland State Police is as follows:

“A driver has been charged in connection with a crash in Anne Arundel County last evening that allegedly occurred after the suspect in a hit and run crash attempted to elude that driver who was pursuing him.

The deceased is identified as Mark A. Wieland, 43, of Severn, Md.  He was driving a Chevrolet Silverado pickup. 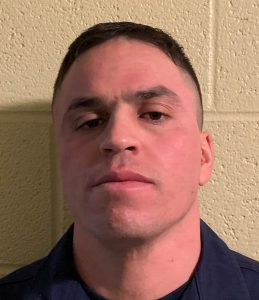 The driver charged is identified as Salah Mamache, 31, of Baltimore, Md.  After consultation with the Anne Arundel County State’s Attorney’s Office, Mamache was charged overnight with negligent homicide, criminally negligent manslaughter, fleeing and eluding, negligent driving, reckless driving, and speed greater than reasonable and prudent.  He is awaiting an initial appearance before a court commissioner.  Mamache was driving a Honda Civic.

According to the preliminary investigation, shortly before 4:30 p.m. yesterday, multiple 911 callers to the Glen Burnie Barracks reported two vehicles had been involved in a hit and run collision and were traveling at a high rate of speed southbound on I-97 between I-695 and Rt. 100.  The barrack broadcast a lookout for a Chevrolet Silverado and a Honda Civic.

Moments later, a trooper who had just completed a traffic stop was sitting in  traffic on the ramp from westbound Rt. 100 to Rt. 170 when he saw those two vehicles pass him at a high rate of speed.  The vehicles appeared to be chasing each other.  The trooper saw the Chevrolet Silverado pickup enter the intersection and strike another vehicle before crossing the grass median and travel into oncoming traffic, driving north in the southbound lanes.  The pickup then drove back onto the right side of the road and accelerated away at a high rate of speed, still followed by the Honda Civic.

The trooper activated his lights and siren, attempting to clear traffic out of his way, but was unable to get close to the Chevrolet Silverado because of the high rate of speed and because the Honda Civic failed to stop and continued to pursue the pickup.   From a distance behind, the trooper saw the two vehicles turn onto eastbound Rt. 176.

The trooper slowed for traffic at the intersection of Rt. 170 and Rt. 176.  The trooper continued in the direction the two vehicles had traveled in and came upon a crash scene at Rt. 176 and Old Telegraph Road involving the Chevrolet Silverado, which had struck a utility pole and overturned.

Emergency medical services personnel were requested to respond.  Weiland was transported by EMS personnel to the University of Maryland Shock Trauma Center.  He was pronounced deceased later in evening.

Mamache, the driver of the Honda Civic, told investigating troopers the driver of the Chevrolet Silverado struck his vehicle and did not stop.  He said he drove after the pickup in an attempt to obtain a tag number.  Troopers did observe what was described as minor damage to his vehicle.

The investigation is continuing.”