According to a Memo from Dana P. Moore, Baltimore’s Acting City Solicitor, Baltimore City is set to pay out more than $10 million to settle lawsuits related to the now infamous Gun Trace Task Force (GTTF).   Most notably, the settlements call for Umar Burley and Brent Matthews to be paid almost $8 million.

On December 10, 2020, less than one month after being awarded nearly $8 million, Burley was arrested in Harrisonburg, Virginia.  Burley is accused of shooting a woman at a Motel 6 and is now charged with attempted murder and malicious wounding.

In 2010, while fleeing Baltimore Police and members of the GTTF after an illegal stop, Burley and Matthews crashed into 86-year-old Elbert Davis’ vehicle during the chase.  Mr. Davis was killed.  Instead of calling an ambulance or providing medical treatment, Baltimore City police focused on planting drugs in Burley and Matthew’s vehicle to justify their pursuit and illegal stop. 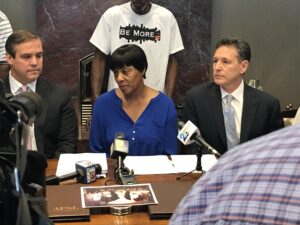 The pursuit began when members of the GTTF illegally stopped Burley under the false premise that he was conducting a drug transaction. Burley fled the scene, and the officers illegally gave chase, which ended when Burley’s vehicle crashed into the vehicle of Davis, killing Davis and injuring his wife. Among the officers giving pursuit are Sergeant Wayne Jenkins, who was sentenced to 25 years in federal prison, Sergeant Ryan Guinn and Detective Sean Suiter, who was fatally shot last year. Jenkins testified that he ordered heroin to be planted in Burley’s vehicle directly after the crash.

After a lengthy investigation, the GTTF was found to have acted as a criminal gang, robbing drug dealers and those suspected of dealing, selling drugs and falsely claiming overtime.  More than 100 cases the task force worked have been overturned, and the victims of their illegal activities have filed lawsuits seeking compensation, including the Davis family.  The $10 million in settlements noted in the Acting City Solicitor’s Memo is providing some of that compensation.  Unfortunately, the Davis family’s case is not included among the settlements.

The Davis family’s suit is “the one case [in which] an innocent man was killed,” said Azrael Franz Partner, John Solter, Jr.  The family’s grief, he said, “has turned to anger.”

“Baltimore City and its corrupt police department has refused to accept any responsibility for its role in causing the death of Elbert Davis, Sr. and the serious injuries to [Elbert’s wife,] Phosa Cain.  The fact that the city has elected to ignore these innocent victims and instead compensate [Burley,] who contributed to this terrible incident only adds insult to injury.  It’s truly disgraceful and it shows that nothing has changed in Baltimore City.” Said Solter.

While Mayor-elect Brandon Scott has said that these settlements “resolve a financial burden,” Azrael Franz will continue to fight for justice for the Davis family.  Baltimore City’s burden and the impact of the GTTF corruption is far from over.